Dusk at MacLeish is a word and image installation of seven ecologically-themed, digitally-projected graphic poems by Naila Moreira (the poet) and me (the photographer), inspired by Smith College’s MacLeish Field Station in Whately, Massachusetts. The installation is an early entry in the Arts Afield Initiative, in which artists and writers respond to prompts in the environment of the Field Station over a 200-year period. This revolutionary idea of intersecting time, space, art, and writing will allow monitors to track climate and environmental change as well as shifts in artistic expression. “Dusk at MacLeish” will eventually become a small piece in a much larger puzzle. 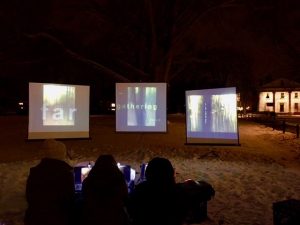 On three evenings in Spring, 2018, Naila and I and our three student helpers projected each of the seven graphic poems across three, free-standing screens outdoors at night on the Smith College Campus. Word-and-image combinations flashing across the screens suggested an analogue for what it’s like to move through the forested landscape at MacLeish. Your attention is drawn here by light; there by sound; over there by smell; back here by sound. It’s a dislocating yet holistic sensory experience.

The words and images in the poems derived from three trips Naila and I made to MacLeish Field Station at dusk in Fall, 2017; she took notes as I made a new series of dusk images. The shortest of the poems is sequentially reproduced here in its entirety. We’re thinking of replicating the series in a forthcoming artist’s book. Have a look at Naila’s site, too: www.nailamoreira.com. 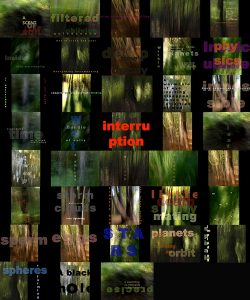 Dusk at MacLeish Series, Vernal Pool, 2017-19 Archival pigment print of digital photographs The 38 images in this broadside are superimposed with lines from Naila Moreira’s poem “Vernal Pool.” Reading from top to bottom, left to right, the poem rises up from the images that shelter and embed it.